The distribution of interestingness

On April 22, David Landy posed a question about the distribution of interestingness values in response to my April 3rd post on “Interestingness Measures.”  He noted that the survey paper by Hilderman and Hamilton that I cited there makes the following comment: 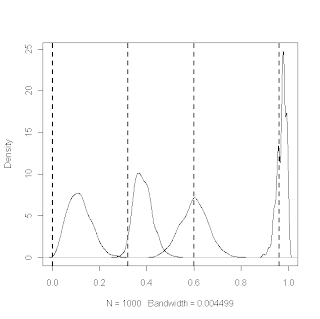 The right-most peak in the above plot corresponds to Case B, for which the “true” Gini interestingness value is 0.96.  Here, the peak is much narrower, although again the average of the simulation values (0.971) is slightly larger than the true value, which is represented by the right-most vertical dashed line.  Case C is modeled on the CapSurf variable from the UCI mushroom dataset that I discussed in my earlier post on interestingness measures: the first three levels are equally distributed, but there is also an extremely rare fourth level.  The “true” Gini measure for this case is 0.32, corresponding to the second-from-left dashed vertical line in the above plot, and – as with the previous two cases –  the distribution of Gini values computed from the multinomial random samples is biased above this correct value.  Here, however, the shape of the distribution is more symmetric, suggesting possible conformance with the Gaussian expectations suggested above.  Finally, Case D is the third peak from the left in the above plot, and here the distribution appears reasonably symmetric around the correct value of 0.6, again indicated by a vertical dashed line. 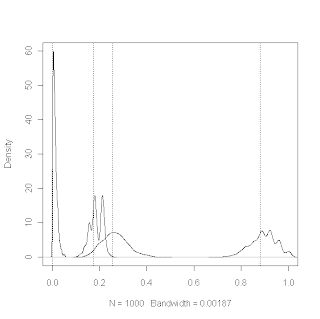 The above plot shows the corresponding results for the interestingness measure for the same four cases.  Here, the distributions for the different cases exhibit a much wider range of variation than they did for the Gini measure.  As before, Case D (the smoothest of the four peaks) appears reasonably symmetric in its distribution around the “true” value of 0.255, possibly consistent with a normal distribution, but this is clearly not true for any of the other three cases.  The asymmetry seen for Case A (the left-most peak) appears fairly pronounced, the density for Case C (the second-from-left peak) appears to be multi-modal, and the right-most peak (Case B) exhibits both asymmetry and multimodal character.  The key point here is that the observed distribution of interestingness values depends on both the specific simulation case considered (i.e., the true probability distribution of the levels), and the particular interestingness measure chosen. 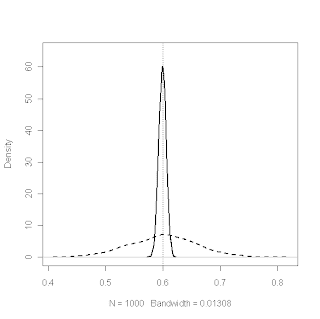 As noted above, if we expect approximate normality for a data characterization on the basis of its asymptotic behavior, an important practical question is whether we are working with large enough samples for asymptotic approximations to be at all reasonable.  Here, the sample size is N = 100: we are generating and characterizing a lot more sequences than this, but each characterization is based on 100 data observations.  In the UCI mushroom example I discussed in my previous post, the sample size was much larger: that dataset characterizes 8,124 different mushrooms, so the interestingness measures considered there were based on a sample size of N = 8124.  In fact, this can make an important difference, as the following example demonstrates.  The above plot compares the Gini measure density estimates obtained from 1000 random samples, each of length N = 100 (the dashed curve), with those obtained from 1000 random samples, each of length N = 8124 (the solid curve), for Case D.  The vertical dotted line corresponds to the true Gini value of 0.6 for this case.  Note that both of these densities appear to be symmetrically distributed around this correct value, but the distribution of values is much narrower when they are computed from the larger samples.
These results are consistent with our expectations of asymptotic normality for the Gini measure, at least for cases that are not too near either extreme.  Further confirmation of these general expectations for a “well-behaved interestingness measure” is provided by the four Q-Q plot shown below, generated using the qqPlot command in the car package in R that I discussed in a previous post.  These plots compare the measures computed from Cases C (upper two plots) and D (lower two plots), for the smaller sample size N = 100 (left-hand plots) and the larger sample size N = 8124 (right-hand plots).  In particular, in the upper left Q-Q plot (Case C, N = 100), compelling evidence of non-normality is given by both the large number of points falling outside the 95% confidence intervals for this Q-Q plot, and the “kinks” in the plot that reflect the multimodality seen in the second peak in the second plot above.  In contrast, all of the points in the upper right Q-Q plot (Case C, N = 8124) fall within the 95% confidence limits for this plot, suggesting that the approximate normality assumption is reasonable for the larger sample.  Qualitatively similar behavior is seen for Case D in the two lower plots: the results computed for N = 100 exhibit some evidence for asymmetry, with both the lower and upper tails lying above the upper 95% confidence limit for the Q-Q plot, while the results computed for N = 8124 show no such deviations. 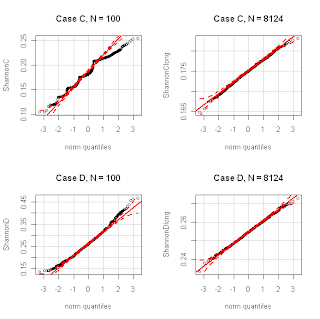 It is important to emphasize, however, that approximate normality is not always to be expected.  The plot below shows Q-Q plots for the Gini measure (upper plots) and the Shannon measure (lower plots) for Case A, computed from both the smaller samples (N = 100, left-hand plots) and the larger samples (N = 8124, right-hand plots).  Here, all of these plots provide strong evidence for distributional asymmetry, consistent with the point made above that, while the computed interestingness value can exceed the true value of 0 for this case, it can never fall below this value.  Thus, we expect both a positive bias and a skewed distribution of values, even for large sample sizes, and we see both of these features here. 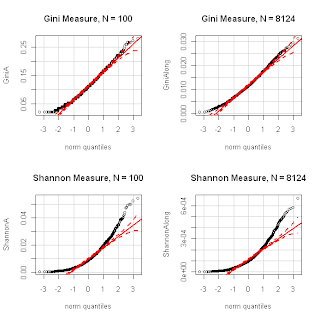 To conclude, then, I reiterate what I said at the beginning: the answer to the question of what distribution we should expect for a “good” interestingness measure is, “it depends.”  But now I can be more specific.  The answer depends, first, on the sample size from which we compute the interestingness measure: the larger the sample, the more likely this distribution is to be approximately normal.  This is, essentially, a restatement of the definition of asymptotic normality, but it raises the key practical question of how large N must be for this approximation to be reasonable.  That answer also depends, on at least two things: first, the specific interestingness measure we consider, and second, the true heterogeneity of the data sample from which we compute it.  Both of these points were illustrated in the first two plots shown above: the shape of the estimated densities varied significantly both with the case considered (i.e., the “true” heterogeneity) and whether we considered the Gini measure or the measure.  Analogous comments apply to the other interestingness measures I discussed in my previous post.
Posted by Ron Pearson (aka TheNoodleDoodler) at 10:51 AM 1 comment:

In my last post, I discussed the use of odds ratios to characterize the association between edibility and binary mushroom characteristics for the mushrooms characterized in the UCI mushroom dataset.  I did not, however, describe those computations in detail, and the purpose of this post is to give a brief discussion of how they were done.  That said, I should emphasize that the primary focus of this blog is not R programming per se, but rather the almost limitless number of things that R allows you to do in the realm of exploratory data analysis.  For more detailed discussions of the mechanics of R programming, two excellent resources are The R Book

by Michael J. Crawley, and Modern Applied Statistics with S (Statistics and Computing)

by W.N. Venables and B.D. Ripley.
As a reminder, I discuss the odds ratio in Chapter 13 of Exploring Data in Engineering, the Sciences, and Medicine