Boxplots and Beyond – Part II: Asymmetry

In my last post, I discussed boxplots in their simplest forms, illustrating some of the useful options available with the boxplot command in the open-source statistical software package R.  As I noted in that post, the basic boxplot is both useful and popular, but it does have its limitations.  One of those limitations is that the standard boxplot outlier rule is not appropriate for highly asymmetric data.  Specifically, the standard rule declares points to be outliers if they lie a fixed distance – typically, 1.5 times the interquartile distance (IQD) – beyond the quartiles.  While this rule is appropriate for symmetric, approximately Gaussian data distributions, highly asymmetric situations call for an outlier detection rule that treats upward-outliers and downward-outliers differently.  For a strongly right-skewed distribution, for example, flagging any point more than 1.5 IQD’s above the upper quartile may be too liberal, declaring too many points to be upward-outliers, while flagging any point more than 1.5 IQD’s below the lower quartile may be too conservative, declaring too few points to be downward-outliers.  To handle these cases, it is necessary to incorporate some measure of skewness into the outlier detection rule. 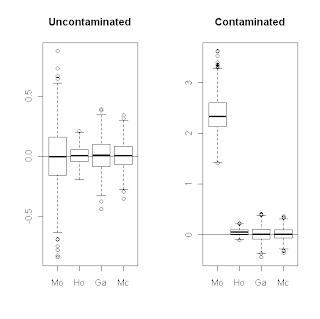 One of the points I discuss in Chapter 7 of Exploring Data is that the standard skewness estimator - defined as a normalized third moment - is extremely sensitive to outliers, worse even than the standard deviation in this respect.   This point is illustrated in the above figure, which gives a standard boxplot summary comparing four different skewness estimates for two different cases.  The boxplots on the left present results for these skewness measures each applied to 1000 statistically independent standard Gaussian data samples, each of length n = 100, while the boxplots on the right present the corresponding results for exactly the same data sequences, but with each Gaussian data sample contaminated by a single additive outlier, lying 8 standard deviations above the mean.  The boxplots designated “Mo” in these comparisons correspond to the standard moment-based estimator, while the other boxplots correspond to three other skewness estimators, discussed in the next paragraph.  Two points are immediately evident from these results: first, that the moment estimator exhibits much higher variability than the other three estimators considered here, and second, that the moment estimator is extremely outlier-sensitive.  In particular, note that a single outlier in a dataset of size 100 causes the median estimate to shift from about zero, corresponding to the correct nominal result, to a large enough value to suggest asymmetry comparable to the J-shaped exponential distribution (for which the skewness is 2), all on the basis of a single anomalous data point.
Two of the other three skewness estimators compared in these boxplots are Hotelling’s skewness measure, designated “Ho,” and Galton’s skewness measure, designated “”  Both of these alternatives to the standard moment-based skewness measure are discussed in Chapter 7 of Exploring Data, which presents similar comparisons to those presented here for these three asymmetry measures.  Hotelling’s measure is equal to the difference between the mean and the median of the data, divided by the estimated standard deviation, and it can be shown to lie between -1 and +1.  The boxplot comparisons presented here show that this measure is much less outlier-sensitive than the standard skewness measure, although this estimate does exhibit a slight positive bias (slight is the operative word here: the mean value for the contaminated “Mo” estimates is 2.36, while that for the “Ho” estimate is 0.05).  Galton’s skewness measure is based on sample quartiles and is closely related to the fourth measure discussed next.  Specifically, both of these measures are based on the following function: let x and y be any two values from the data sample satisfying the condition that x is smaller than the sample median m, which is in turn smaller than y.  The function h(x,y) on which these measures are based is defined as the ratio of two computed values: the numerator is (y – m) – (m – x), and the denominator is y – x.  If we take x as the lower quartile and y as the upper quartile, we obtain Galton’s skewness measure, designated “Ga” in the boxplots.  The other skewness measure is the medcouple, defined as the median of all values of h(x,y) computed from points satisfying the condition that x < m < y.  Note that both the Galton and medcouple measures also lie between -1 and +1, since this is true for h(x,y) for any admissible values of x and y.  Detailed comparison of the “Ga” and “Mo” boxplots shows that both of these estimators exhibit small bias – i.e., their median values are both approximately zero, as they should be – and that the medcouple exhibits a slightly smaller range of variation than Galton’s skewness measure does.
Procedures in R to compute the standard skewness measure, Hotelling’s measure, and Galton’s measure are available from the companion website for Exploring Data.  The medcouple is not discussed in the book, but it is available in the R add-on package robustbase, which also includes a procedure to construct the adjusted boxplot described next.  There, rather than using 1.5 interquartile distances to set both upper and lower outlier limits as in the standard boxplot rule, the adjbox procedure in the robustbase package makes this distance depend on the medcouple value computed from the data.  Specifically, both outlier detection limits have the same general form, but different specific parameters: in both cases, the nominal distance of 1.5 IQD’s is multiplied by a scale factor computed from the medcouple value.  For lower outliers, this scale factor is exp(-3.5 Mc), while for upper outliers, this scale factor is exp(+4Mc).  A detailed discussion of this outlier detection rule and the rationale behind it is presented both in the paper, “An Adjusted Boxplot for Skewed Distributions,” by Ellen Vanderviere and Mia Huber, published in the proceedings of the 2004 COMPSTAT symposium, and from the technical report cited in the R documentation for the adjbox procedure. 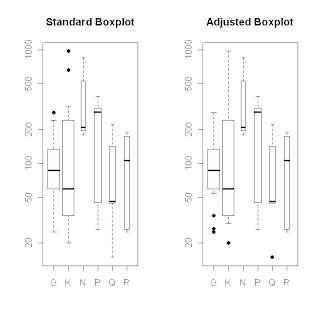 The above figure compares two sets of boxplots for the UScereal dataset discussed last time, from the MASS package in R.  Specifically, both boxplots summarize the reported potassium content for breakfast cereals from 6 different manufacturers, each identified by a one-letter designation.  Both boxplots are generated using the log = “y” and varwidth options to obtain boxplots whose width is proportional to the square root of the number of records in each subsample.  The difference in these two sets of boxplots is that the one on the left uses the standard outlier identification algorithm, which is the default for the boxplot command in base R, while the boxplot series on the right uses the modified outlier detection rule just described, based on the medcouple skewness measure and available via the adjbox command in the robustbase add-on package.  The points declared outliers for each boxplot are shown as solid circles for emphasis (simply specify “pch = 16” in either boxplot command), and these points illustrate the difference between the two boxplot results.  Specifically, the left-hand group of boxplots only show upward outliers, one for manufacturer G (General Mills) and two for manufacturer K (Kellogs), while the right-hand boxplots only show downward outliers, three for General Mills, one for Kellogs, and one for Quaker Oats (manufacturer Q).  The question remains which of these conclusions is more reasonable, and this question will be revisited in subsequent posts using two additional boxplot extensions: violin plots and bean plots, both of which incorporate nonparametric density estimates to give a more detailed picture of the data.  For now, it is enough to note three things: first, an alternative to the standard boxplot is available that provides distinct detection rules for upper and lower outliers; second, that this alternative approach often finds different outliers than the standard boxplot rule does; and third, there is evidence to suggest that this modified boxplot does indeed perform better in the face of significant distributional asymmetry.  For a more detailed discussion of this point, refer to the technical report cited above.
Finally, it is worth emphasizing that the robustbase package contains a lot more than just the adjbox procedure discussed here, including multivariable outlier detection procedures like adjOutlyingness, robust multivariate location and scale estimation procedures like covMcd, and robust fitting procedures like lmrob and glmrob for linear models and generalized linear models (specifically, a robust logistic regression procedure for binomial data, and a robust Poisson regression procedure for count data), among others.  The biggest drawback of this package is that the documentation is incomplete, so it is important to check out the references cited there to get a clear idea of what some of these procedures do and how they do it.  That said, it is important to emphasize two points.  First, if R were a commercially supported software package, this level of documentation would be inexcusable, but R is not a commercial product: it is the freely-available end result of the loosely coordinated efforts of a very large group of unpaid volunteers.  The second point is that, despite the limitations of the documentation, the robustbase package provides implementations of procedures that could, in principle, be built on the basis of their published descriptions by anyone who wanted to.  The experience of doing that would be educational and intellectually rewarding, but it would also be a lot of work that most of us would simply never do, so we would not have any of the neat goodies that the authors have made available to us.  In the end, while I would strongly encourage them to finish the documentation, more importantly, I offer my heartfelt appreciation for their releasing the package so I can use it.
Posted by Ron Pearson (aka TheNoodleDoodler) at 2:02 PM